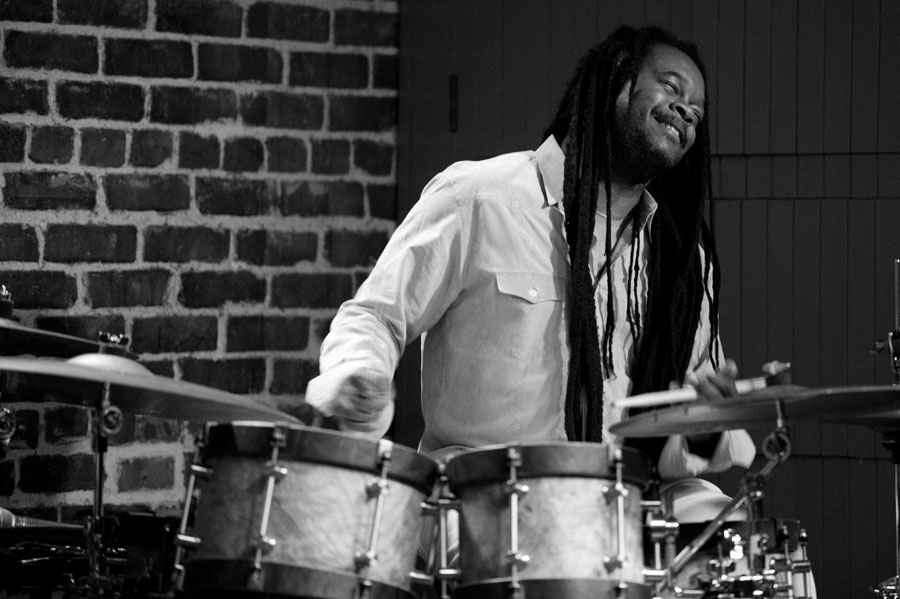 Quentin E. Baxter, a native of Charleston, SC, comes from a family of drummers with his mother leading the troupe. “I’m unable to recall a moment in my youth void of having drums either at home or church.” Baxter’s unique skillsets have garnered a GRAMMY Award as producer/performer, in total 4 GRAMMY Nominations as producer/performer, the 2017 South Carolina Governor’s Award for the Arts, a City of Charleston Proclamation “Quentin E. Baxter Day” – April 25, 2017, the 2017 College of Charleston Alumnus of the Year Award, the 2017 Eddie Ganaway Distinquished Alumni Award, and a 2017 Inductee to the Savannah Coastal Jazz Hall of Fame.

“…the most amazing, exciting, musically dedicated drummer I have ever known.” – René Marie

Baxter’s passion for world-wide performances is paralleled by his dedication to educate, promote, produce, and present world-class artists in his home town and neighboring regional communities. As a testament, from 1997 to 2019 he served as Adjunct Professor of Jazz Studies at the College of Charleston and formed the production company Baxter Music Enterprises (BME, LLC) in 2004. He also serves as Musical Director of the Charleston Jazz Initiative (CJI), a multi-year research project that explore the jazz history and legacy of African American musicians from Charleston and other places in the Carolinas; founding board member of the Jazz Artists of Charleston (JAC); board member of both the Charleston Symphony Orchestra and Engaging Creative Minds; producer of numerous benefit concerts/auctions for Avery Research Center, Jenkins Orphanage, Halsey Gallery, Spoleto USA, and many other artistic organizations who share the same sentiment to enhance and enrich lives via art and music here in the Lowcountry. From 2012-2015, BME, LLC teamed up with Sermet’s Downtown, LLC to create Charleston’s only “listening room” experience, The Mezz – Charleston Jazz Bar. Baxter is currently in the design/development stages of the Baxter Center for Music Performance, Education, and Production – a stand-alone structure designed and dedicated to the presentation and advancement of live music.